The Challenge
At the start of March, I spontaneously invented a challenge for myself: make one piano song a day, for the entire month.

The idea was to compose a short music piece using only the piano instrument in FL Studio. It didn't matter how short each piece was, as long as it was something new and unique.

I had a secondary goal to make the entire set 30 minutes long.

The Results
Long story short, I accomplished both goals! I created 31 tracks during March 2021, totaling over 30 minutes of music.

Check out how it all turned out below! I hope you enjoy! :D

The Stats
I was able to collect some cool stats at the end of the challenge! I think it adds a neat context to the experience:

I spent 65 hours, 54 minutes composing the music, according to FL Studio. This means I spent an average of 2 hours, 7 minutes creating each song, or 14 hours, 53 minutes per week - that's like a part-time job!

The total length of the music is 30 minutes, 1 second. This means the average length is 58 seconds per song. The shortest is 38 seconds, and the longest is 1 minute, 39 seconds.

All 31 tracks! They have different tempos, so sizes don't match durations.

The Reflection
At the start, I had basically no clue how the challenge would turn out or how difficult it would be. But by the end I definitely learned a lot!

I've never done anything like this challenge. I don't consider myself much of a composer in general, with a general lack of experience with music theory and writing for real instruments. Although I did take piano lessons as a kid, composing is largely a different set of skills.

In the end, I was really surprised and proud of the results - I didn't know I was capable of creating the quality I achieved. Is there room for improvement? Yes, tons. But I surpassed my expectations at least, and that feels great. And of course, I simply am relieved to be done with the challenge.

At the start I was very optimistic, with quotes such as:
February 28: "It's relaxing not caring about instruments or theme"
March 1: "I think I'll have fun with this challenge!"
March 3: "So far it's been really fulfilling haha"
March 3: "The quality of [the pieces] have been a lot higher than I would have guessed"

After a few days though, it was dawning on me how much I had left to do:
March 5: "It's scary thinking I'm only 10% through the challenge though."
March 5: "I'm clocking in at over 8 hours of composing work so far. Extrapolating, I'll spend like 50 by the end of the month haha"
March 7: "Seriously, if you want a month to feel like it's taking so long, make a song every day. I can't believe after 1 week, I still have 3 weeks and a few days to go. That sounds like forever!"

Mid way through, the music was infiltrating my dreams. I was realizing that my daily energy was drained a lot quicker, but I was still feeling optimistic:
March 14: "5127 notes! 30 hours of work! Big numbers!"
March 16: "I do think it's the same amount of time spent each time... I just procrastinate longer"
March 16: "I'm definitely going to be proud of myself for accomplishing it in the end"

In week three there was a moment where I documented feeling overwhelmed.
March 21: "It's getting extremely hard for me. At the start I would just try things and it would work. Now I'm scrapping like 4 ideas before finding something I can pursue, and still struggling to upload it by the end of the day haha. Thursdays have me struggling because it's always a day with late meetings at work, plus I have to scrape together weekly Mine Blocks updates after midnight those days. Burnout is afoot!! 🦶"

I felt better about it later that day, but the general sentiment the final week was eagerness to be done:
March 27: "gosh if I'd known how insane this would look near the end I might have been scared off from trying haha"
March 31: "almost free!"

And by the end, I was both relieved and ready to reclaim the freetime for other adventures:
March 31: "FL says I've spent 64 hours on it so far. I've certainly spent time in worse ways"
March 31: "Gosh that was a challenge indeed!"

While I probably wont be doing something like this again for a while, I do think it was a really powerful adventure. Whether it's through creating music, art, or poetry, an entire month seems long enough to explore and expand one's capabilities, and learn a thing or two about one's ability to manage self-discipline and burnout.

I felt that there were a lot of styles I wasn't able to experiment with due to the daily time constraint and my limited experience in certain styles and in theory. But this challenge did give me a new understanding of what I can currently accomplish, and a new respect for music and knowledge that's beyond my range of experience. 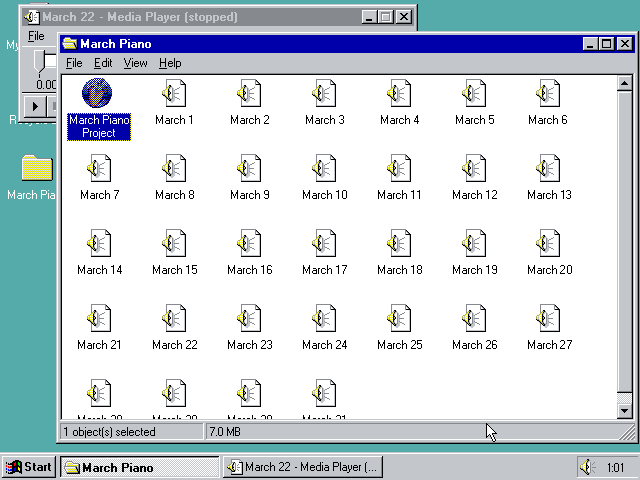 This post lacked images, so here's just one of the project folder, nothing crazy.

The Friend
My good friend Plygon really helped me get through the challenge.

The night before March started, I mentioned I was going to try making one song a day for the month, and to my surprise, Plygon immediately joined in! I didn't expect that at all! Having someone participate alongside me was really great; it meant I had someone to talk to and relate to during the challenge. Plus, I got to hear awesome music from a friend every day, which was motivating!

In the end, he also made it through the challenge with 31 awesome piano pieces. You can listen to his piano music here, on Bandcamp!

The Future
In general, I still feel like this project is complete in some ways. I want to come back to this when I have a bit more time and make something cool with it.

I had a few ideas, including a music video project. But it is even more ambitious than my last one, and I definitely have more important projects to work on first!

Also, some people have asked if I could learn to play the pieces on a real piano. With enough practice, all of the pieces are technically possible to play, but I'm currently not patient enough to put in that sort of time. I might record them being played on a real piano another way though!

I don't know, we'll see where it goes. For now, it's simply up on Bandcamp to listen to and to buy! :)

A quick status report: Right now I'm finishing up my 2021 Projects Video for YouTube, and continuing with the weekly Friday Mine Blocks Beta updates.

Posted 1 year ago.
Return to posts page
Posts around this time
All posts ➜
»
First 3 Months of Mine Blocks Beta!
Feb 13, 2021 - It's been 3 months since first release. Find out what's new and what's next!
6 Months of Mine Blocks Beta Updates!
May 16, 2021 - Here's an update on how Mine Blocks Beta has been going for the last few months!
Mine Blocks is an HTML5 Game Now!
Nov 21, 2021 - Here it is! Mine Blocks update 1.30.3b, featuring a complete rewrite of the game, and a bit more!
Comments on this post
To keep comments relevant, commenting on old posts is disabled.
Please use a different way to contact me. Try Ask.fm or Twitter. Thank you!
Previous page
Page of
Next page
This site uses cookies to save games and logins, and to hide this dialog lol. Third parties use them for social buttons, targetted ads, and analytics.
Yay, thank you for all the cookies.
Cookie/Privacy Policy